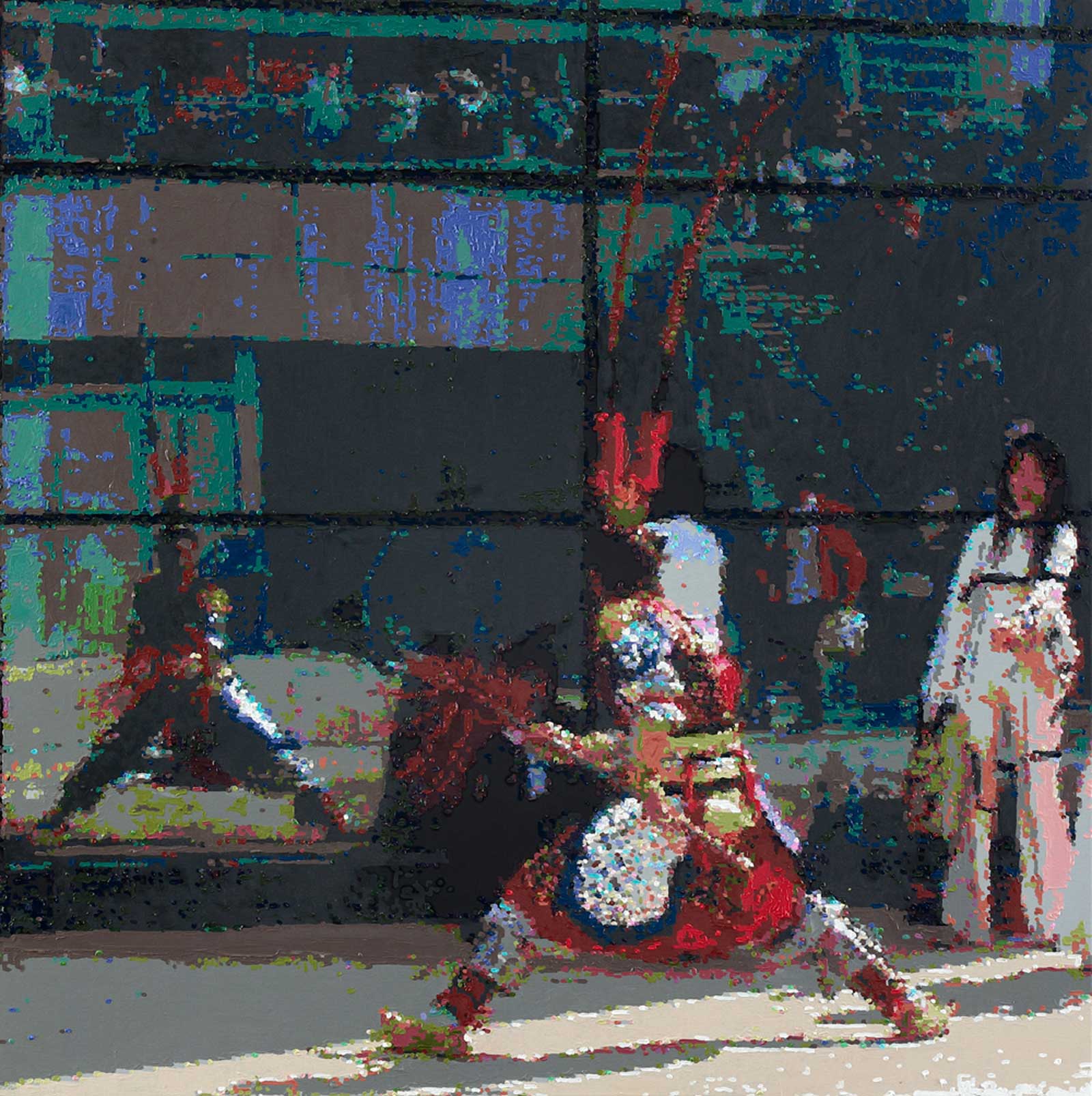 We find ourselves in China. In Peking, to be precise. At the ‘second life in Peking’ exhibition, our eyes are currently traversing the individual perceptions held by the artist duo Römer & Römer in the capital city of the People’s Republic. Römer & Römer, to be still more precise, are Nina Römer, born in Moscow with the maiden name of Tangien in 1968, and Torsten Römer, born in Aachen in 1968. The two artists studied together as master students under A.R. Penck at the Düsseldorf Academy of Art. The painter-duo has been working together since 1998 and are currently living and working in Berlin. The motifs they choose are comprised of impressions taken from an exceedingly ordinary way of life within the public sphere, and provide the beholder with selected insights into the many perspectives that the everyday has to offer. These are unfailingly filled with rich figurative staffage or single protagonists who, within the context of the duo’s larger oeuvre, are worked into a global character-sketch of the human being.

Römer & Römer’s work, however, is far from being concluded. On the contrary, a new series of works has recently arisen which bears the already mentioned and poetic title ‘second life in Peking’. In this series, we encounter anonymous people, lyrically playful scenes, unknown architectural fragments, and never before seen locations in The Central Kingdom. Römer & Römer are greatly representative of the artist’s life as lived in the 21st century. In the age of globalization, travelling is a must for the artist, just as it is for the dedicated business man or woman. Over the course of their work, the couple has been active in a variety of public spheres, at times set within their own more customary surroundings, at other times among entirely foreign and international territory. Their selection of subjects follows a rather consistent methodology; what they tend to search for, gather and collect are elements of a universal language. Their representations invariably speak in one way or another to the beholder, arousing emotion and stirring the soul, regardless of his or her place origin. Visual information and inspiration for their current series of pieces was collected by Römer & Römer on the streets and in the squares of Peking, where, in May of this year, they presented a group of works depicting scenes of everyday city life in Berlin, in an exhibition entitled Based on a True Story held in the Today Art Museum. Now shifting into a reverse gear, the duo has decided to present Peking to the Western hemisphere. In their ramblings through the city, Römer & Römer discovered a number of young people who, with amateur enthusiasm, are inclined to try their talents at the traditional art of Peking opera-singing that began to bloom in the late 18th century—a perfectionist and minutely detailed theatrical pageant comprised of song, dance, martial arts, a supremely fine command of mimic, and fantastical costumes and masks.

The young Chinese actors establish independence from the traditional standard by performing on the streets, and through their use of unconventional costumes and modern dress, often bearing ornamental arms like shadow dancers, or painting their faces with such grandiose singularity that the faces themselves are elevated to a comprise an entirely new art form.

How were the scenes depicted in ‘second life in Peking’ located? How did they finally make their way into the medium of oil paint, and onto the canvas to produce paintings? Among the various tools used by the artist duo, a digital camera is an indispensable staple. Photographs provide a point of departure for their large formatted painterly creations, and innumerable snapshots accrue over the course of their walks and travels. These are then examined and selected with great trenchancy at a later date. The digital templates are then intricately processed and edited. The perspective is created and the formatting is determined.

Finally, the entire composition is realized using the most traditional of painting techniques, and transferred into oil paint by the well-trained team conjointly. One artistically important element for Römer & Römer is the colour composition, which lends an elegant lightness to the pieces on the whole, and provides the subjects with a fleeting and ephemeral quality, thereby producing the expression of an entirely unique moment, even if that moment is eternally destined to remain anonymous. The Pointillé technique adopted by Römer & Römer that so characterizes their style, the manipulation of the pictorial resolution using dots, blotches and dabs of colour, creates an interface between tradition and the avant-garde in much the same way that the motifs presented in ‘second life in Peking’ do – derived from an old Chinese theatrical custom, they are nonetheless enshrouded in the garments of the modern era.

On a formal level, their painting recalls the work of the Impressionists but refrains from denying its roots among a digital background. On the contrary, the Pointillé used, with its dots and dabs and flatly painted areas, is also to be understood as producing ‘painted pixels’, from which the pictorial surface is entirely comprised (as is typical of most contemporary photography).