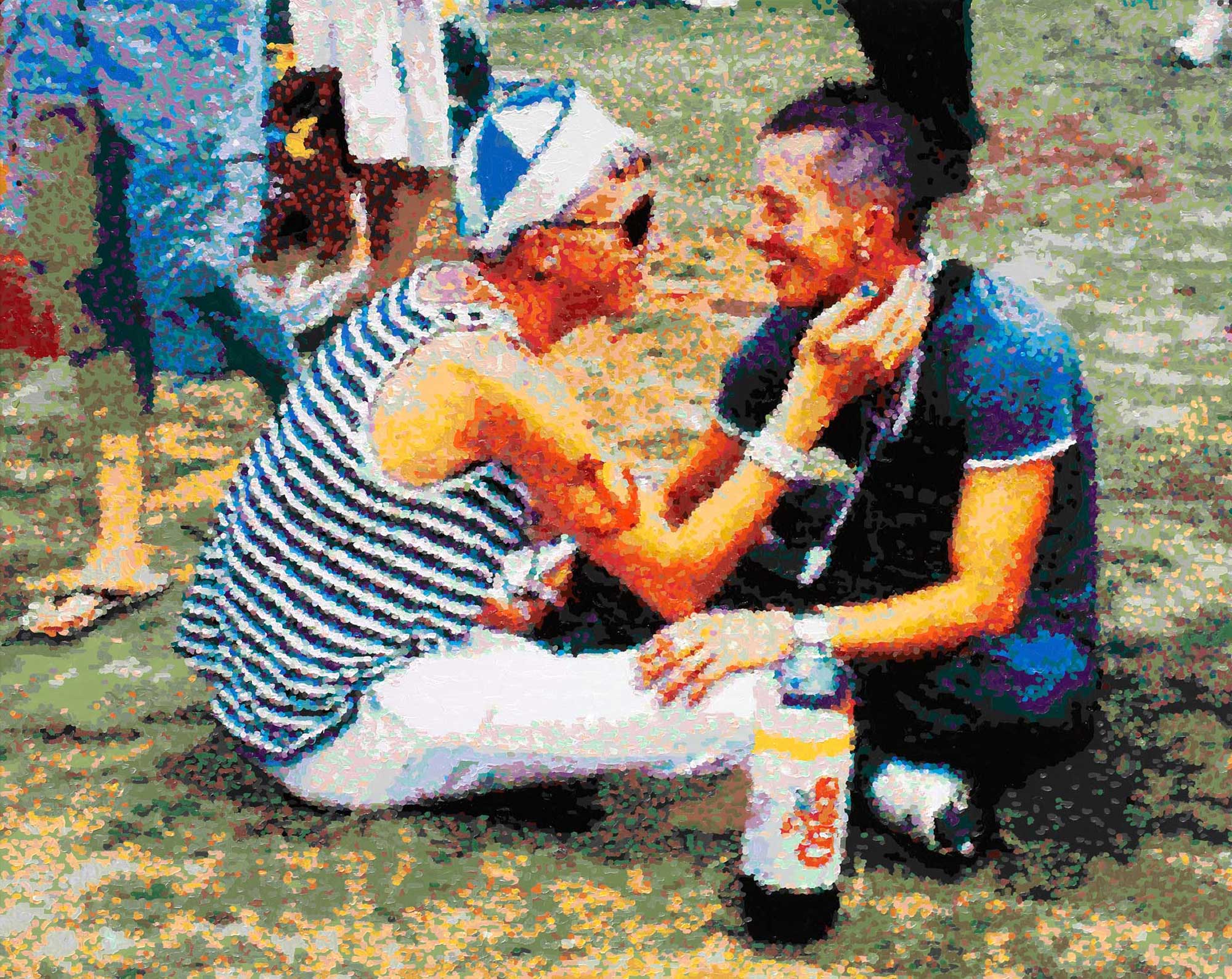 Römer + Römer’s style of painting is distinguished by a particular attention that is paid to the interplay between the individual and the collective, especially within the context of situations where the stricter constraints of daily tasks are lifted – at festivals, public gatherings, demonstrations and in other moments of freedom. Brighton Pride offered countless motifs: laughing Indians, smooching women, people flying through the air on a roundabout. They belong to the many thousands of mostly costumed visitors that the festival attracts each year, a group comprised primarily of lesbians, gays, bisexuals and transsexuals for whom the event has been held since 1992. Here it is remarkable in a double sense how these Indians and Sailors appear in Römer + Römer’s paintings.

Their vibrant colours and flowing contours, which disseminate into faint schematic shapes, come close to a sensualistic perception of art, and in their beautiful disorder 1 they allow the pulse and internal warmth of the British festival to become perceptible. The paintings of Römer + Römer capture the instant that Lessing referred to as a Seminal Moment 2 and stimulate the viewer to illustrate that moment in his imagination. At times, this incitation is underlined by the title, such as in the painting that depicts a male couple. They are sitting cross-legged across from each other; the man on the right tenderly touches the left man’s leg while this Sailor of Love reaches for the right one’s neck. The work is titled Robin und Chris sind wieder zusammen (Robin and Chris got back together). This title not only addresses that singular suspenseful situation but rather a whole array of eventful activities and moments into which the beholder imaginatively translates these seemingly rigid figures on the canvas. Thus, the viewer’s association is not only drawn to the past that is being suggested by the title – their union, break-up and reunion – but particularly to the future that is being evoked within the painting. It does not explicitly depict the climax of rapprochement – perhaps a kiss – but rather the moment shortly before. It is precisely this that Lessing understands to be a Seminal Moment. It is an instant of maximum aesthetic impact, especially since it differs from the climax of the captured act. In this respect, the moment is inscribed with a narrative discrepancy that the viewer is inspired to overcome. He sets the bodies in motion in his mind, consummating their past and future actions in an imaginary manner, consequently creating an impression of illusory liveliness. The expression of the work and the viewer’s imaginativeness play with each other. This interaction illustrates how form and content determine one another in Römer + Römer’s paintings; what they show is conditioned necessarily by the way in which they depict it and vice versa. This absolute correlation of content and form: viz., their reciprocal revulsion, so that content is nothing but the revulsion of form into content, and form nothing but the revulsion of content into form 3 proves the artistic quality of this oeuvre. For the purpose of its characterization, a second remarkable attribute should be pointed out. It concerns the complex media-based character of the works and constitutes their absolute modernity.

The sensual presence of the paintings, their converging contours and their colouration are not an expression of impressionistic pointillism but are rather derived from an artistic practice, where photographs are first shot, then computer edited, mounted and distorted, and subsequently transferred to canvas. Therefore, it is not an impressionist view on the world but rather the painterly interpretation of a photographic depiction of it. What the pictures of Römer + Römer show has always already been communicated medially: a world in an utterly uncertain ontological state. Much akin to photorealistic painting, this manner of painting also reflects the relation of painting to photography. It does not strive however to recreate a maximally illusive copy of the photo but it rather calls attention to a difference that photorealistic painting hides underneath its glossy surfaces – that is, the photographic image necessarily consists of pixels whereas this is optional for the image of the painting.

This critical examination of painting techniques and forms of art that differ from their own is essential to the artistic output of Römer + Römer. Nonetheless, their consideration of the media does not remain in the aesthetic realm, rather it also incorporates fundamental aspects of our general perception. In this way, painting gains a social dimension. This critical position is what the painting of Römer + Römer shares with Impressionism. If the latter had namely rebelled against academic tradition, claiming the insight that in plain air, one generally sees things completely different than in the studio, that our determining reality is therefore a completely different one and consequently calls for different forms of representation 4, Römer + Römer show with the complex medial build-up visible in their works that the determining reality has always been communicated medially.

Nevertheless, what is surprising and original is that the paintings do not convey the usual impression of distance, strangeness and unsettledness that is common with such prefixes. For the beholder, the world does not dissolve into the pixels that it consists of in its electronic mediation, nor does it travel to virtual distances. Instead, a surprising element of proximity and familiarity may be perceived. On the one hand, it originates from the relatively flat iconic difference of the paintings – for instance in the smaller works and portraits, which is in fact – an innovative facet of Römer + Römer’s work. It does not place the figure and background in strictly conflicting fields that are augmented by how the figure confronts the viewer 5, but rather it is the relative blurring of this relationship that invites the viewer into the picture for debordering.

This closeness and familiarity emerge most notably however from the strong sensual presence and animative nature of the paintings as well as from their vitality and their sense of humour. These are attributes that shape the artists’ playful handling of their paintings and which look back at the viewer from the images, for example in a blonde beauty’s tattoo (Smother me in chocolate and feed me to the lesbians) or in an Indian’s gaze (Mike and Gerard als Indianer / Mike and Gerard as Indians).