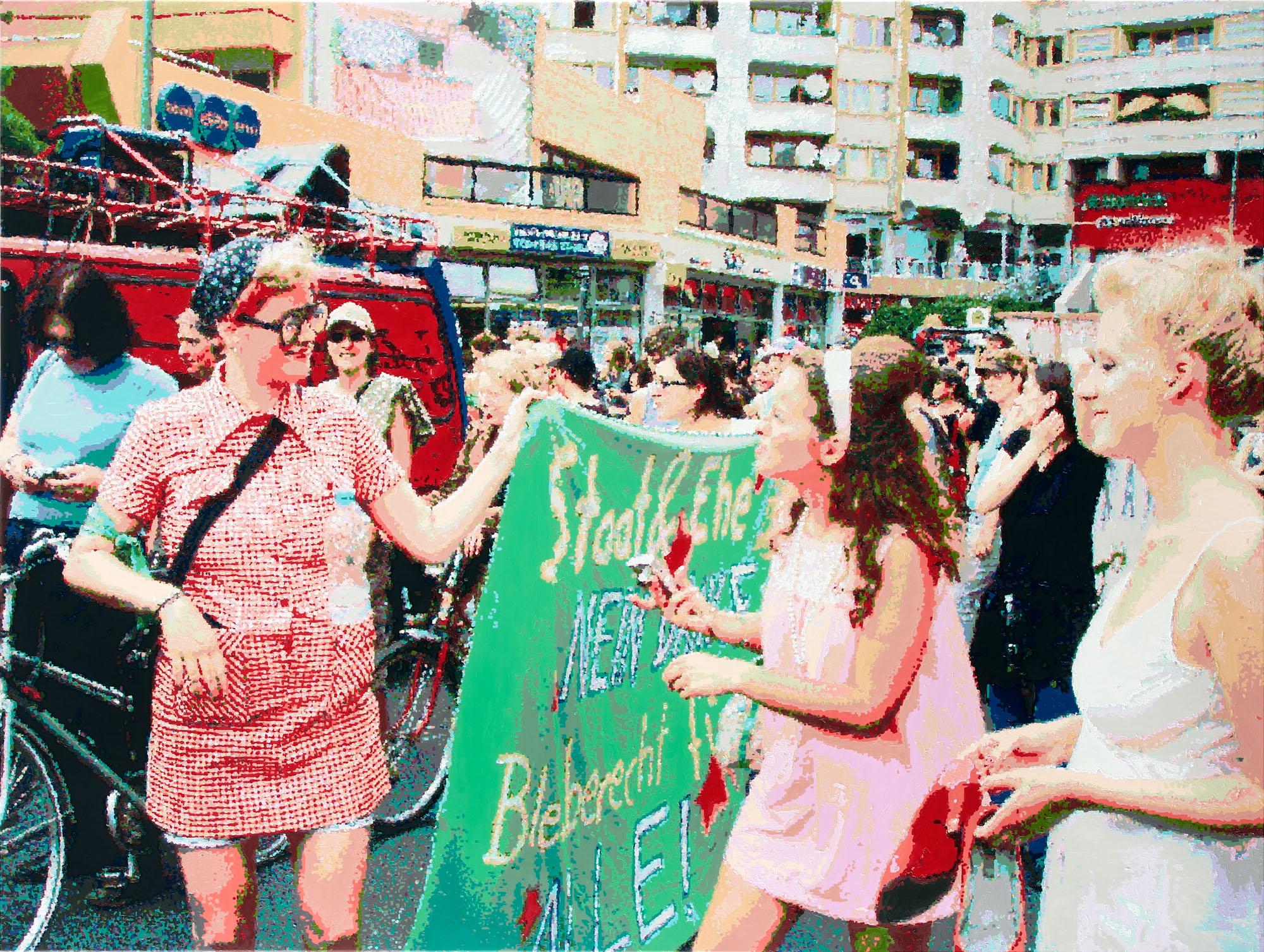 Römer+Römer, a couple of artists, Nina Römer (1978-) and Torsten Römer (1968-), met at an international art project in 1998, starting to co-work, and paint based on Berlin, Germany, now. It’s uncommon that Torsten educated democratically from Aachen, West Germany and Nina socialistically from Moscow, Russia, have worked together. They got to know each other first at Dusseldorf Art College, and after the collapse of the Berlin Wall the historical difference between the cultures of capitalism and socialism served as the driving force of co-working. As a project to overcome the historic wounds and the regional disparity, Römer+Römer planned <Germany & Russia Kiss Performance> at 22:00, Nov. 2, 2003, and took a photograph of scenes linking from Moscow to Berlin, designing Underground White Birch Forest>, a 150m mural, too. 1)

Their main joint work is traveling, photographing the everyday life of big cities, re-creating its universal reality into painting by close observation. Römer+Römer select by discussion among thousands of photographs taken and keep discussing what they are to do together. Their way of joint work has the same context as the German expression-ism. In the early 1900’s, based on Dresden and Berlin, the group of <Die Brücke> worked consisting of such young artists as E. Kirchner, E. Haeckel, K. Schmidt-Rottluff, etc. who opposed to the immorality of the middle class and material civilization, and formed an art community where they lived and painted together themed on the social consciousness of those days. They wanted to be a bridge which could realize the revolutionary spirit elated worldwide through painting. This tendency has since spread to literature or architecture as well as art.

Römer+Römer’s joint art works are said to have stemmed from a combination of technical and pictorial media. They are the artists who photograph the everyday life of urban people with a digital camera and re-work it with a computer, and show a new aesthetic condition, utilizing the function of the record and processing of technical media as the basis of joint work to make art. They translate by photography the technical pictorial attributes into painting and express painted pixels, colour spots and colour fields on canvas; thus, the process, on the whole, gives rise to the impression of painting.

This couple travels to big cities all around the world; in the course of it, they record a numerous number of moments of impressions photographically. Their photographs are not for an album but for painting taken into consideration. They answer through painting the question saying How does everything correlate with one another and where is our place of our life located in this big world?”2) For that reason, their works have lots of delicate expressions and visual events keep happening.

Fighting for freedom
“We are looking for free moments in this society for the sake of a peaceful and democratic community. It is made possible by various types like political demonstrations or public festivals.”3) As they said, their eyes are turned openly to all directions, interested in street scenes, festivals, parades, demonstrations, etc. and capture public spaces, bars, cafes, and stores, etc. The dense and complex the artists capture in cities and at mass events provide them the opportunity to show their pictorial qualities, and their competence in painting. The intangible in a small-sized photograph gives way to the clearly understandable in a large-sized canvas.

For example, <Don’t come in barefoot: Barfuß kommt ihr hier nicht rein> shows a scene of a demonstration against the summit talks of the EU and the G8 held in Mar. 2007. The German government invited the heads of the above super powers to an informal memorial festival of the EU, and the riot began before the talks. The painting insisted that all people all around the world including EU have their whole human rights. Assumed was a critical attitude towards the EU political system for the lasting unstable situation, the high unemployment rate, the intensifying military strength and the boycott against its immigrants. Criticized was the G8 policy interested in free world trade without control, instead of the stable world financial system, protection of weather, and food for the hungry. The title of the painting is seen in the banner the demonstrators were holding, too. It’s known that lots of refugees try to move into EU countries by crossing the Mediterranean Sea barefoot. Though surviving their tough journey, they get to arrive there facing no properties or rights. The tendency is that the more EU gets united, the more criticism there is against its exclusive attitude towards its refugees and non-members of the EU.

Also, the festive mood in <Summer in Berlin, Karl-Marx-Alley: Sommer in Berlin, Karl-Marx-Allee> painting a festival of young people on the Karl Marx’s Alley, or <A demonstration for freedom of gays and lesbians in Berlin: Staat & Ehe Nein Danke. Bleiberecht ftir Alle!> expressing a riot of homosexuals, is not unfamiliar to us at all. Like this, their works are characterized by everyday life painted into global realities. Their unprejudiced eyes through non-ideologic liberal expressions compare, evaluate and watch the complex and ubiquitous situations. Their works let us gain a new insight into the situations of the contemporary times, and look at our everyday life from a new perspective.

Essay for the catalogue “War and Peace in the 21st Century”, Gwangju Museum of Art, 2010