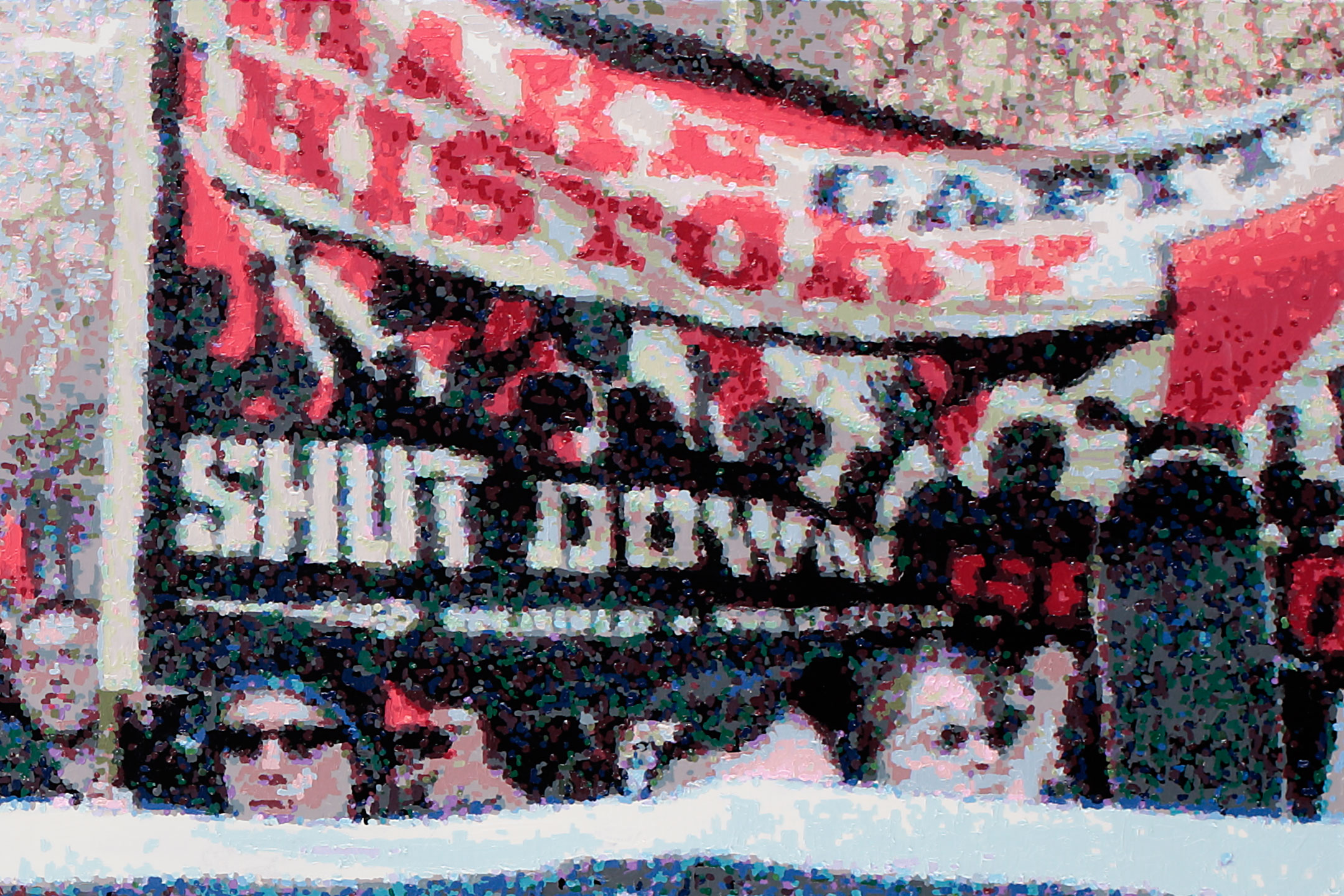 Römer + Römer is an artist couple and duo who live in Berlin. Furthermore, Römer + Römer stands for a painting concept, a façon for seeing things and realities, and then formulating these in painting. Painting, as carried out by Nina and Torsten Römer, is a reflection on contemporary life in the society and city in which the artists live – in Berlin. In their work, the two artists depict the ways of life and social realities belonging to the city as they perceive it.

The creative process involved in their painting can be described as a complex procedure comprised of a combination of technical image-making processes and traditionally founded handcraft: In an initial step, the couple photographs situations and scenes observed by them within the public realm – on the streets, in front of bars and restaurants, at concerts and, as is the case with many of their most recent pieces, at demonstrations and political events. Many of these snapshots deal directly with the realities and attitudes toward life shared by a younger generation. As a second step, Römer + Römer select photos from their archive which they see fit for translation into painting. These are primarily photographs which, due to their compositions, color schemes, and complexity, provide the best possibilities for creating impact in painting; they are atmospherically dense, intense and dynamic.

In their newer work, produced over the last couple of years, Römer + Römer have expanded on all that which has already so prominently distinguished their work: painting in the face of and in fulfilment of the conditions created by a technical media, and an art form which subjectively reflects and documents the social realities.

The computer is an important tool for Römer + Römer; not only do they catalogue their initial images there but also use it, with the help of graphic editing programs, to determine the compositions and color schemes which are later to be realized on the canvas. This enfolds a highly determinant technical process into their painting. Painting thus becomes a work of translation, and a documentation of directly observed immediately lived moments and situations. The couple’s work might best be understood as kind of journalistic reportage, or as a realistic portrayal of subjectively experienced actuality – an actuality full of contradictions and inconsistencies, sometimes even chaotic. In this way, the work of Römer + Römer can be located solidly in time as an important contribution to the visual culture of the 21st century, and as an expression of an art form composed of hybrids, in which the technical possibilities have created conditions allowing for an entirely new staging of the painterly reproduction of reality.

If one could characterize the social and cultural state of affairs in the wealthier nations (such as Germany) over the last few years with the catchwords ‘Electronic Biedermeier,’ thereby characterizing a situation in which revolutionary utopias, extreme political and aesthetic upheaval, and avant-garde achievement (outside of the technical establishment) has been almost unimaginable, there seems meanwhile to have been a shift in consciousness toward the idea that social crisis and political radicalization in a globalized world will increasingly become a lasting part of the landscape.

Though this is thought to apply primarily to poorer nations, the distribution battles in western democratic societies are hardening and the political climate is becoming ever rougher – one is reminded of the unsolved problems in the French Banlieus, the conflict between Turkish and Kurdish inhabitants of Berlin, or between left-wing and right-wing radicals in Germany. The fact that all of these conflicts find their staging upon the street suffices in understanding why the protest scenes set into painting by Römer + Römer feel so explicitly current and seem to move so directly in opposition to the prognosticated ‘Electronic Biedermeier.’

That being the case, things are not as simple as they may seem: although the political situation today is pushing its way back out onto the street, we live in an era dominated by media infiltration into the concept of public life – this in contrast to the 60s and 70s of the past century. The effects of the media are reflected in, among other things, a degenerating understanding of democracy and political participation – both things bearing great immediacy on the notion of freedom.

According to Hannah Arendt, the true meaning of politics lies in the creation of freedom. To the great extent, however, that the political sphere continues to diminish its representation of the public, increasingly becoming something medially intermediated, the political debate is more and more becoming a simulation of itself. Freedom, however, cannot be simulated. This situation and development seem to be accounted for in the pictures of Römer + Römer, especially as there is one thing which they refuse – issuing any clearly defined truth about the state of affairs. Doing so would mean identifying themselves entirely with the pictorially presented banner slogans and sayings.

In fact, the painterly staging of the camera’s perspective seems more to search for a certain distance from the loud volume of the slogans. This distance is reflected in the painterly execution by a kind of analytic and additive-style application of the paint, in which tonal values are placed next to one another so that any complete view of the image is only possible after securing a certain distance from the canvas.

With their portrayal of demonstrations in large format painting, the tradition of history painting has been taken up anew by Römer + Römer and placed into contemporary forms. This genre occupied a prominent position, especially in the pre-photographic era. History painting seems to be – as with Römer + Römer, for example – experiencing a renaissance, though using new accidentals as compared with its pre-photographic past.

The recourse to a historically known genre does not necessarily mean regression but, in the case of Nina and Torsten Römer, should be more appreciated as an experiment and as an extension of their artistic repertoire. The significance of their work also lies in a particular mode of orientation, clarity and self-assuredness; in their creation of pictures, the two artists enter into a dialogue about their own notions about changing reality. They do this as a pair, working together in dialogue with the picture.

It could be stipulated that Römer + Römer use photography to hoard up images from the outer world within their studio, and, through both technical-medial and handworking processes, translate these into painting, so that, ultimately, works come into being which stand in direct relation to the photographic templates. What does this relationship then look like, from what is it defined, and what is the meaning; what consequences are exacted by artistically motivated translation work of this kind?

It is through the painting that the image arises, emulating the photo template exactly; the painting relays the photographed situation in full detail – this being done, however, in large format, and in the medium of oil paint, which not only colors the surface of the canvas but structures it texturally as well. This imitation does not transpire with Römer + Römer in the form of any hyperrealism, whereby each detail is put into jagged relief, but, instead, takes place within an analogy reflecting the functionality of physiological seeing.

This is accomplished in the painting itself through the juxtaposition of broadly flat color values, which then, seen in their entirety, constitute certain passages of the image, with regard to what is depicted. A well-focused image comparable to that dictated by the photographic template can only be perceived, however, from a relatively great distance. When nearing the picture too closely, the area viewed degenerates into a confused jumble of multiple pixels and separate dabs of color.

With their presentation format, Römer + Römer seem to be reacting to the physiological elements of seeing – an activity which is physiologically comprised of focusing on points, moving from point to point. The visual-perceptual action is further comprised of a complex interaction between optical, neurological, and cerebral activity and behaviour. The two artists’ paintings – it can be said – deal with the formal visualization of a mode of visual-perception which requires a certain proximity to or distance from the viewed object or figure in the painting in order to function at all as an optical and conceptual recognition of content.

With this visualization model, the beholder is issued a positional location which almost exactly replicates that of the photographer. Of course, the viewer is not forced to adhere to the assignment of place but, nonetheless, is only actually able to gain overview and recognition of an exact and well-focused image by moving into the distanced position allotted. Any other physical standpoints, especially ones nearer to the painting, depict the image in low resolution and lead to an entirely different modus of recognition. The paintings are thereby transformed into an objects as well as places of analysis for the process of visual perception.

It can be surmised that the artist duo takes on the themes of political manifestation and conflict resolution in their painting because they provide them with the possibilities of portraying larger gatherings of people with differentiation, and infusing the images with the emotionality inherent to mass events and demonstrations. The painted picture, as opposed to the photograph, possesses sensual qualities which, on the whole, point toward emotionalization and the associated increase in importance and meaning.

This kind of emotionalization is also produced in the duo’s painting by the large formats and structuring of the surface through the use of colors and their emotional references. With Römer + Römer, though the process of emotionalization proceeds in measured steps, it certainly reaches its counterpart, so to speak – an analytical rationality in the application of the paint. With this addition of the paint – referring to the juxtaposition of small and clearly separated dabs of color – the onlooker is at once confronted with the rationality of the painting.

In this way, the emotionality of the pictures undergoes an immanent process of examination and auditing initiated by the painting technique applied – or, in other words – due to the additive and accumulative compositional color concepts included by Römer + Römer. In the images themselves, therefore, a contrast or antithesis arises between the emotionality brought into the paintings through the use of color, format, and subject matter on the one hand, and the conceptual rationality of the color addition methods employed, on the other. This obvious contradiction between emotion and rationality is passed on to the beholder as if in the form of a question waiting to be answered, and constitutes the actual basis of the artists’ work, which possesses a socio-medial character yet, at the same time, an emotionality and sensuality with which it knows how to argue and how to convince.