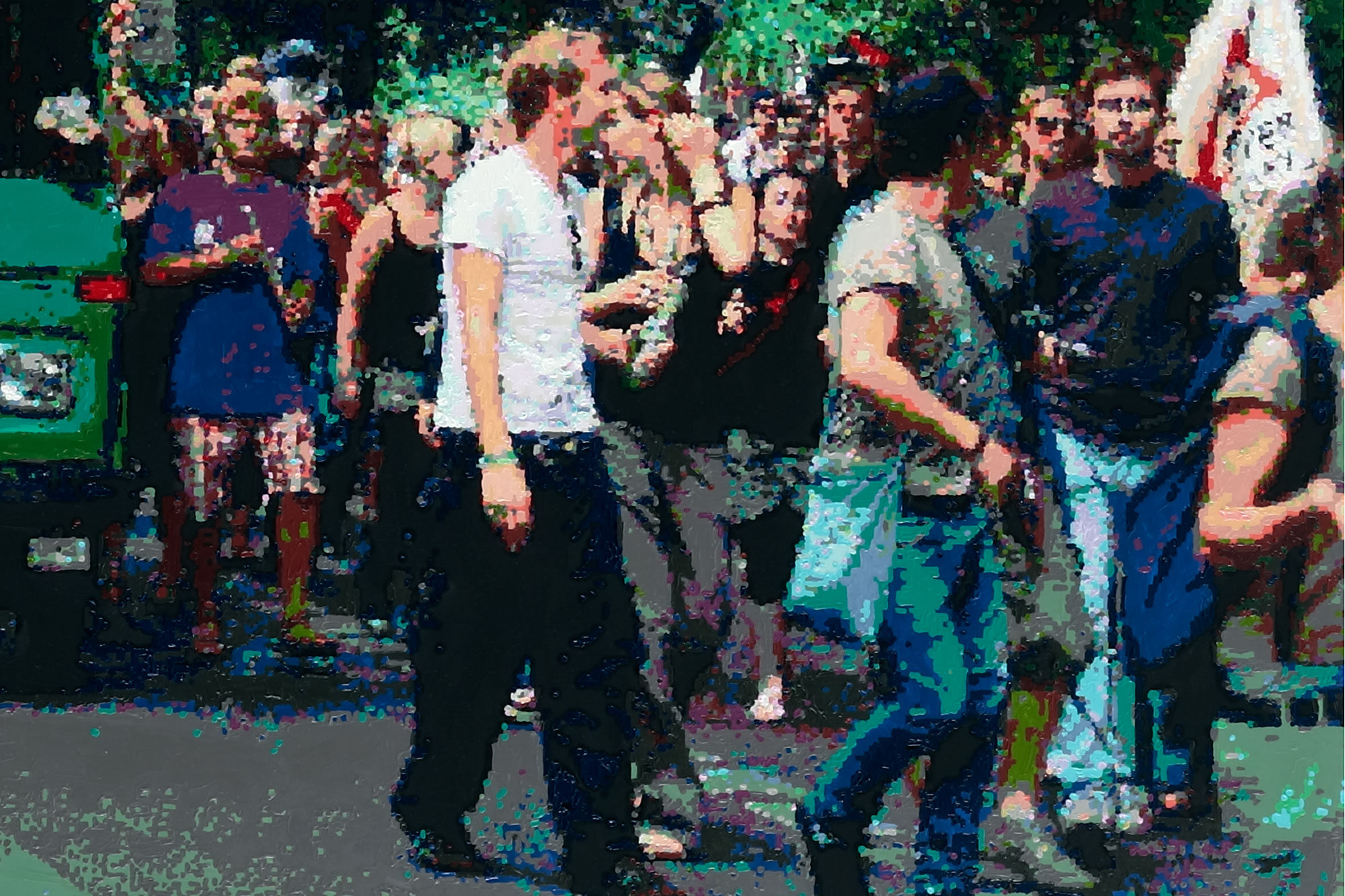 The two artists first met in Düsseldorf at the Academy of Art, where Torsten Römer, a ­native of Aachen, initially studied under the painter Siegfried Anzinger. Nina Tangian, who had come to Germany from Moscow at the age of twelve and who had lived for some of the time in France, met Torsten on 15 February 1998 at the academy’s annual exhibition. When Nina asked him if he could explain to her how he worked and what he painted, Torsten Römer replied that she should just visit him in his studio and that he would explain his paintings to her there. However, he added, Nina should be sure to bring a dead hare with her. That was, of course, a reference to Joseph Beuys, the most famous professor at the academy, who had taught in Düsseldorf until his expulsion in 1972. Torsten Römer had thought of Beuys’s performance Wie man dem toten Hasen die Bilder erklärt (How to Explain Pictures to a Dead Hare) (Galerie Schmela, Düsseldorf, 1965). However, when she visited him Nina brought a deep-frozen chicken with her instead of the hare – a surrogate that she had bought from a fellow-student for DM 5. There is no record of what the two of them did with the chicken, but since that meeting Nina and Torsten Römer have been a couple both in real life and in their art. They soon started working together, and they both studied under A.R. Penck, who accepted them as an artist ‘double act’ and ­allowed them the freedom they needed. Their first joint attempts at painting were not always easy, as the couple relates today; they first had to get to know each other well and to become attuned to one another. Two universes encountered each other on the surface of the painting. In order to be able to paint together, the two individualists had to move closer together, to develop pictures and subjects and to find a common means of expres­sion. It was at this time that their first joint compositions were created: each of the two added parts of it or painted over the sketches and elements of the other. The artists relate how, in those days, they were sometimes annoyed when a successful motif or picture ­element disappeared overnight, because the other had added something new in its place; but increasingly the co-operation worked, was fun and thus eventually permitted them to arrive at a joint artistic development.
Römer + Römer are not the only artist couple to have been formed by the modern age and its art. Famous examples of the joint creativity of artists include the British couple Gilbert & George; Marina Abramovi ´ c and her partner Ulay worked together intensively for several years; and then there are the artist couples Emilia and Ilya Kabakov and Christo and Jeanne-Claude, who always appeared together. In order to work productively ­together as artists it is essential that there should be not only harmony but also tension between the partners; that they should develop a workable plan or concept, so that the joint effort becomes part of a development; and that they should remain attentive to each other, but without defining or isolating themselves too much. It was the modern age that brought forth the type of the radical artist who acts as an individual; a couple, on the other hand, reflects itself in a double presence. Of course that does not occur in a total symbiosis or with the mutual dependence of Siamese twins; it is rather like an ­independent monad, but in the best case it is a well-attuned team with common goals, that gains its strength from mutual support.

The move to Berlin – performances and actions

The photograph and the computer – painting in progress

A picture archive of painting

The artistic process of painting as practised by Römer + Römer can be described as a close combination of technical possibilities of picture production and traditional orthodox painting methods. Both are equally important, but in the end it is only the painted picture that the viewer sees. To this day the two artists continue to employ the methods they
have created and developed over the past years. What has hitherto been the main dis­tinguish­ing feature of their work has acquired the continuity of staying power – a way
of painting in the light of and under the conditions of technological media, and a form of art which reflects and documents social reality in a subjective way.
Nina and Torsten Römer are extremely productive as painters. The production of a picture which consists of thousands of dots and tiny patches of colour takes time, but the highly concentrated work which shows progress on a daily basis also has a meditational aspect. Thus, over the years a wide-ranging and multifaceted oeuvre has been created in the artists’ studio – a remarkable picture archive of the world in our time. In this respect the couple’s work can be seen as an activity of reportage which documents the realistic depiction of reality as they experience it subjectively – a reality which is contradictory, full of fractures and sometimes even chaotic. The Römers’ painting represents a contribution to the pictorial culture of the early twenty-first century, the expression of a hybrid art form with regard to technology and subject, in which modern media create the preconditions so that contemporary painterly images can be created.

A physiology of seeing and enlightenment

We can see that through their photography Römer + Römer introduce pictures of the outside world into their studio and transform them by means of a media and craft-based process into painting, producing works which bear a concrete relationship to the refer­ence photo. But what sort of relationship is it, what determines it, and what meaning is created during the artistic transformation?
Through their painting they create pictures which precisely reproduce the content of the reference photos. However, this is carried out in large format and with the character of oil paint, which not only colours the surface of the canvas but also structures it by adding texture. In the painting of Römer + Römer this imitation does not take the form of hyperrealism like that practised by artists such as Franz Gertsch and Donald Eddy, who portrayed every detail with great precision; instead, they work by analogy or by creating an approximation of physiological seeing. As far as their painting technique is concerned this occurs through the juxtaposition of individual, sometimes contrasting colour values, which when taken together precisely describe a particular picture element with regard to what is being represented. With this form of representation Römer + Römer seem to be reacting to the physiological aspects of seeing; in other words, an activity which takes place within a very small area at a time, point by point. The act of seeing and perceiving consists of a highly complicated interaction of neural, cerebral and psychic activity and behaviour. In Römer + Römer’s painting it is therefore a form of presenting and making visible the qualities and skills of physiological seeing, perceiving and recognising that require a particular position on the part of the viewer, a defined proximity to or distance from the subject of the picture, in order for the visual and conceptual recognition of the content to function. At this point, in contrast to the hyperrealists, the reference photo is no longer the binding model but is used only in the sense of a tool made fertile through interventions and changes on the computer.
With this form of representation the artists give to the viewer a specific position which more or less corresponds to that where the photographer stood. Of course the viewer does not have to comply with these instructions about where to stand, but only from a position which is some distance away can one gain an overview of the entire proceedings and see a sharply focused picture with all its details. Other viewing positions, especially closer ones, show the picture dissolved into its component elements, in the extreme case as a non-representative field of colour full of abstract signs and patches of colour. That leads to a divergent manner of seeing, but not to a perception of the picture content. In the light of this idea, the Römers’ paintings become objects as well as places of analysis for the processes of physiological perception and visual recognition. Correspondingly, by seeing and looking at their painting a particular form of enlightenment takes place – the enlightenment of seeing and understanding.

Compared with the photo reference, the painted large-format picture possesses sensuous qualities which point as a whole in the direction of an emotionalisation and the associ­ated increase in significance. This emotionalisation occurs in the art of Nina and Torsten Römer, then, also as a result of the colour and surface structure and their tactile qualities. For Römer + Römer this process of emotionalisation proceeds, however, in measured steps, since it also encounters its counterpart: the analytical rationality in the application of the paint and the offer to the viewer to become involved with the more physiological aspects and qualities of their painting. By means of the analytical application of paint the viewer is confronted with the rationality of such painting, parallel to the emotionality of the picture content. The emotional elements in the representation thus gain an immanent control, even a criticism. Thus there arises in the picture a counterpart and contradiction between content, in other words the subject, and its rational execution through a con­scious presentation in the composition, through colour and format – that is to say ­possibilities which have an emotional effect but can also be analysed rationally. The art
of the Römers arises in the production process, in the rationality of a concept, on the basis of which it forms one of the artists’ consciously developed forms of “staging”. The apparent contradiction between emotion and rationality in this painting is thus passed on by Römer + Römer to the viewers like an offer, like a question awaiting an answer. But in this hybrid constellation in the border zone between emotion and reason we are hardly in a position to decide finally where one area begins and the other ends. This contradiction, the dilemma described here, occurs, however, in the pictures, and disintegrates when one regards the apparently separate areas as two sides of the same coin, as necessary and essential complements, without which this type of painting would not be possible. Only in cooperation and in seeing together can the full reality of the painting and the art of Nina and Torsten Römer take place.
Herein lie, then, the real basis and quality of their artistic activities, which possess a socio-medial character, but argue at the same time with emotionality, sensuality and rationality.

Text by Peter Funken in the monography “Meer der Freundschaft”, published by Prestel, 2011