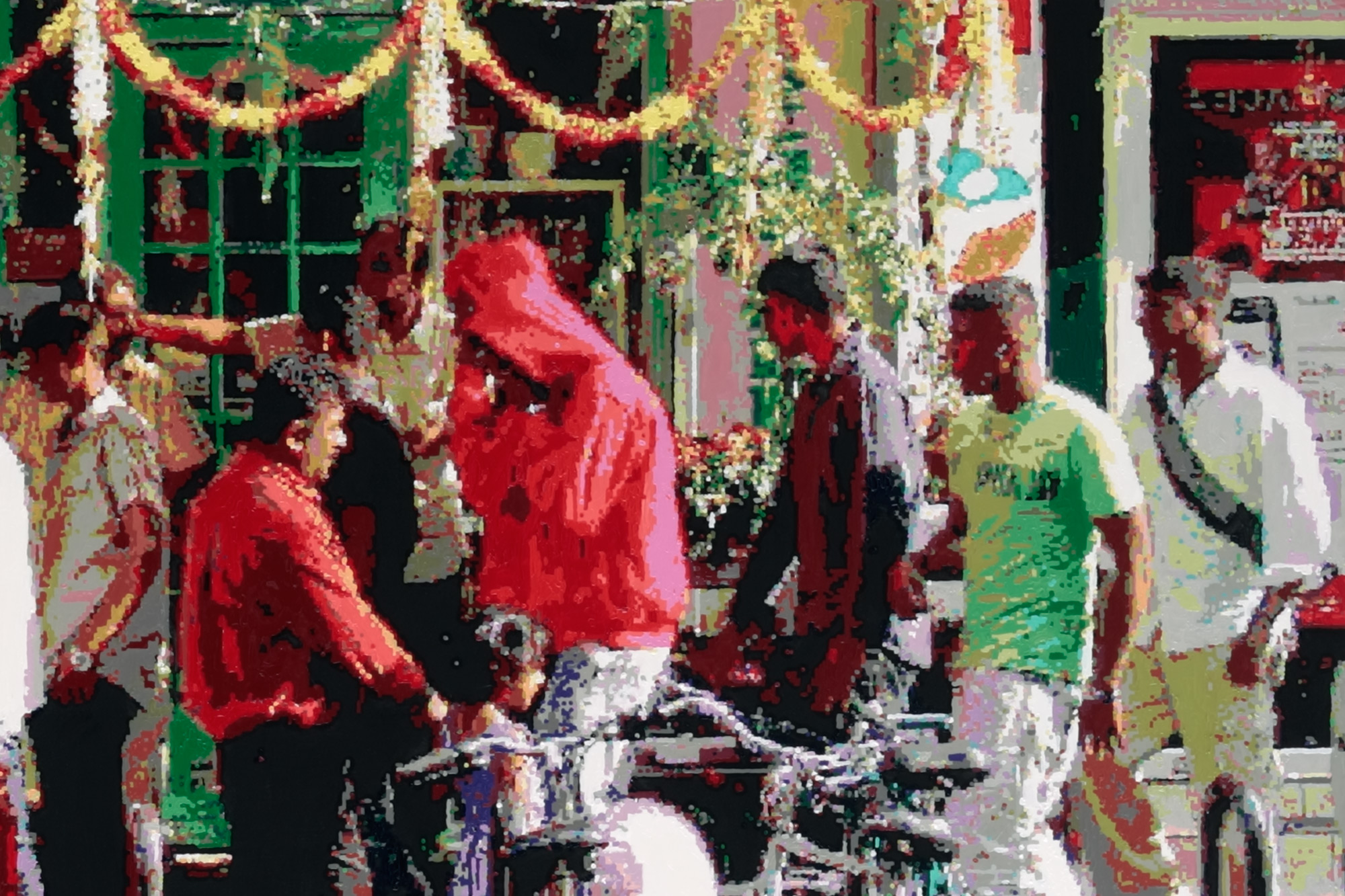 Nina and Torsten Römer belong to a generation of artists, for who technical visual media with their possibilities to document and to process were naturally available for the production of art and who therewith created new aesthetic conditions. As a consequence, Römer + Römer developed their painting in a close and very concrete relationship to photography and the possibilities of the computer. Thus, their painting became an imaging and presentation process, which is hardly influenced by direct inspiration or controlled by formal compositional work. To the artist couple image production means to utilise photography with respect to painting, i. e. to assess their self-made photographs as references and to implement them in the oil painting medium later on. In so far the art of Römer & Römer does not at all exclusively emerge from a painting process, but already starts with photographing and image processing of the photographs on the computer. According to this, their art is a matter of a complex process aiming for and resulting in a painted picture, whose production nevertheless requires some preparatory work of technical kind at the same time consisting of a communication about which subjects, which details are to be painted onto the canvas later on. It should be apparent that only the most expressive photographs are being translated into large-sized painting. The painting of the artist couple does not deny the photo technical forerun, it rather finds its impression in the translation of the technical pictorial attributes into painting and manifests itself at the picture surface by painted pixels, colour spots and colour fields at large giving rise to the impression of a picture and defining it.

During the last year both artists travelled in many countries and visited big cities. In the course of this they have recorded numerous moments and impressions photographically. Their journeys lead them, for example, to Casablanca in Morocco, to Korea where they saw the border to North Korea, they visited the south of Italy, Sicily, and they also went to Paris and Madrid as well as to Vladivostok in Russia. In the pictures taken along the way Römer & Römer particularly captured scenes and situations in cities photographically. These are moments that attracted their attention as visitors because they were especially striking. However, they didn’t shoot any typical tourist photographs, but they took their travel pictures considering professional aspects, i. e. considering aspects of a potential painting. Of course, Römer & Römer were on the way having a trained perception and, thus, the photographs brought with them are no usual souvenirs, but most of all graphical material of a world changing rapidly under the conditions of mechanisation and globalisation.

Watching the newly developed series of paintings that, as painting, notably refer to the photographical references both thematically and atmospherically, one can get the impression that the artists captured their travel impressions mainly posing the following question: “How does everything correlate with another and where is our place in this story of our life in this big world?” Indeed, this easy question is a big question and the answer given by the artists with their large pictures is complex and diverse. It deals at the same time with the known and with the unknown they met: The joy of the Koreans to amuse themselves on a funfair close to the woeful, sharply marked border to the northern part of the country astonished them as well as colourful decorations at an Indian festivity in a Parisian district. In contrast, the girls dressed in jeans and chic T-shirts meeting in the Sicilian city of Catania at the weekend on a Piazza or the image of some young people at a Woodstock revival festival in Poland have surely seemed less uncommon to them. In Morocco, Römer + Römer were attracted by the colourfulness of daily life within the dreariness of shabby architecture as well as by the people’s opportunity to do things outside that are done mainly in the interior spaces in Germany – playing table football is meant here. The artists’ eye is turned to all sides, it is open, interested in the public – in political manifestations, in street settings, in festivities and parades. Images of interior spaces are added to – also here it is about public spaces – bars, coffee shops, stores. This eye perceives the particular within the everyday. It seems important to the artists that many people are on camera, that there are many details, that there is something to look at, that something visually happens … and in their pictures always much is happening. The dense and complex the artists captured with their camera in cities and at mass events provides them the immediate opportunity to demonstrate their pictorial qualities, their technical competence in painting. What can hardly be recognized on the rather small-sized photographical references becomes strangely tangible, blatantly obvious and only understandable in such compactness on the large-sized paintings: this world is – especially within metropolitan areas – brimming with, accumulated with people and things, it seems complex and highly condensed.

Thus, all details painted by Römer + Römer in their pictures seem like layered and built – this even applies to a translucid, cloudless blue sky. Nevertheless, such painting does not evoke the static – always, that’s the sense you have, the momentary and the upcoming motion permanently pervading our life and its places is kept in mind and painted, too.

One can realize passages of these paintings pin sharply from distance – only approaching they reveal being composed of many added colour layers, of hundreds of pixels and small spots. Sometimes an almost impressionist atmosphere seems to prevail in these pictures, but this impression is mainly evoked by a precisely calculated method, because it is based on an almost objective painting working with the possibilities of the serial and informal – exact colour spots or stripes – or with the two-dimensional distribution of colours. Hence, here it is mainly worked with rational pictorial means. And this having the idea to gain artistically a high concretion of the representation as well as intending to almost suggestively work on the viewer, because such painting is always also experienced thinking of an expression of emotionality and vitality.

One can realize from these pictures that both artists have been with amazement travelling, but still time and again they came across something known – e. g. the huge advertising spaces commending a brown soft drink, or the promotion of internet-cafés and communication meanwhile having developed something like a “global village”.

Their pictures are by no means exotic in the sense of a glorification – at the latest one can realize this watching the on the occasion of this exhibition newly developed works containing settings of Berlin, because the represented festivity of young people on the Karl-Marx-Allee or a demonstration of gays and lesbians appear in their painting as lively and intensely as the bright colours or the shining light they were attracted by in Asia or North Africa.

It is characteristic of the observation and painting of both artists that every day life reveals itself in their pictures as global reality, because meanwhile advertising and promotion are quite similar all around the world and form a kind of visual background noise in big cities and metropolises. This world, this electronic village, appears in these pictures surprisingly diverse – this has to do both with the artistic necessity to look closely and to differentiate and with the ability to translate the snapshot-like captured situations adequately into painting.

Watching the art of this duo, one can learn how to approach different cultures respectfully, thereby also better understanding one’s own culture in its changing nature. Then, such a perspective distinguishes less between the familiar and the strange, but rather perceives the dynamic and motion of change as evidence of an emerging world culture, whose outlines are only recognisable to some extent, yet. Liveliness is a distinctive sign of this new kind of culture. Its paradigms are also based on the technical revolution that both produces and at the same time changes it as well as on the economic conditions that are probably much talked about in future. The art of Römer + Römer deals with all of this – especially subtly. With their unprejudiced eye the artists create an openness of presentation that is unideologic and, thus, owns the quality to take note of the complex ubiquitousness of actual phenomena without comparing them hastily, evaluating or suppressing them. The road there leads via photography, computer and painting, i.e. via a technical and a pictorial description of visual phenomena. Close observation, exact translation into the artistic. Actually, these are established artistical practices in order to provide information about reality. Being consequently practiced and utilised, possibilities arise over and over to gain new insights and to look at the world from a new perspective.

(Text from the catalogue of the exhibition Römer + Römer – Based on a true story in the Today Art Museum, Peking, 2009)